In the beginning of July GARS is attending historical event Weichselmünde 1628 in fortress Twierdza Wisłoujście, Gdansk, Poland. For once we have chance to present actually Finnish soldiers in foreign event! So, even if we are the bad guys to the Polish it’s an honor to attend! 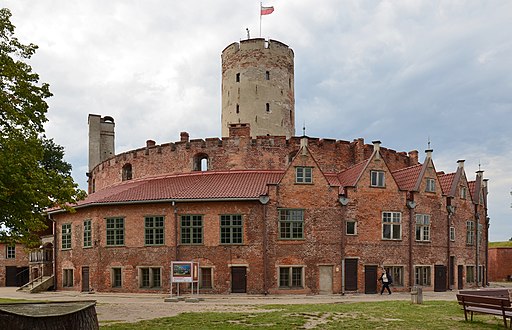 This is a first of two blog posts about Finnish troops in king Gustavus’s field army in Prussia during the summer of 1628. First, we look at the most dramatic battle of that year’s campaign, the one most associated with the city of Gdansk/Danzig and the Vistula mouth fortress. Below is what Finnish historians have written about it. Sources are a classic study Hakkapeliittain Historia II by Arvi Korhonen (1942) and Pohjan Prikaatin Historia by Stig Roudasmaa (1984).

In the end of June the king launched a special operation that had been planned in secrecy: attack on the Polish and Danzig fleets that had been hiding from the blockaging Swedish navy in the Weichselmünde harbour. Led personally by the king, the troops chosen to this mission consisted of the Alexander von Essen’s Finnish (Ostrobothnian) infantry regiment as the main body, supported by four [or eight] cavalry companies: they also had eight leather cannons, two larger half-kartaune cannons and two boats transported in carts. This force, not much bigger than 1000 men strong in total, crossed the difficult swamps east of Vistula river mouth where the enemy didn’t expect anyone to attack, especially not with artillery!

On the early morning of 26.6.1628 (in modern Gregorian calendar: 6.7.1628) the king’s troops reached the Vistula river and the fleet anchored there. Artillery attack started: two of the Polish ships were sank almost immediately, and others took several damage before fleeing to Danzig with the help of tailwind. The attacking force came under the fire from Weichselmünde fortress and the Finnish infantry lost 12 soldiers and one company commander, Scottish-born captain Patrick Hume. After the ships had fled to safety it was decided not to try to attack the Weichselmünde fortress because of heavy rain, and the force returned back to Dirschau where the rest of the field army (totaling over 11000 men) was stationed.

In the next post we take closer look at the men of von Essen’s Finnish regiment.